Joe Pacetti, was born in an unwed mother’s home and adopted and raised in Tulsa, OK. His career in fine jewelry started at age 20 working at a Zale’s store. After two years of outselling his coworkers, and making a record $43,000.00 sale, (average sale was $850.00,) he left because he received no bonus or commission for the sale.  Four months later, he started his by appointment only business in Tulsa. Joe  is an independent, internationally acclaimed jeweler and certified gemologist, who has over 41 years of experience traveling worldwide, purchasing the finest gems and jewelry designs for his most discriminating clientele. Whether it be the latest in contemporary styling to the old-world classic designs by such notable houses as Buccellati, Bulgari, Cartier, David Webb, Oscar Heyman, Paul Flato, Tiffany, Harry Winston, Graff,  Schlumberger, or Verdura, to name a few, his inventory always excites the eye and stimulates one’s interest.  Joe’s business is still by-appointment-only, which affords him the opportunity to give each client the personal attention he or she deserves. Joe’s patrons have always been by referral, a satisfied client sending along a friend to experience his expertise, knowledge and taste. Many families are now in their third generation of being a satisfied J. Pacetti client. Joe is based in Dallas and maintains an office in New York City, as well, where his own atelier’s hand-craft one-of-a-kind treasures to covet for a lifetime. Joe has one daughter, Christina, a magna cum laude graduate of the University of Texas, and also a certified graduate gemologist of the GIA. Joe’s husband, Arnold Vincent Pacetti, a Chilean robotics engineer is currently enrolled in the GIA programs to obtain his degree in gemology, as well. 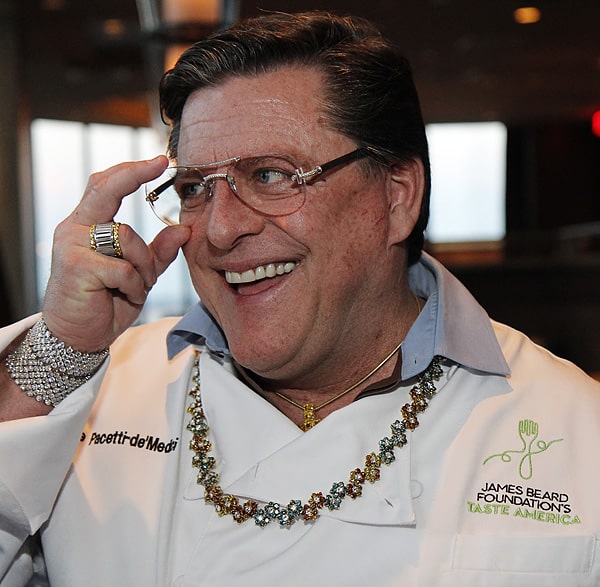 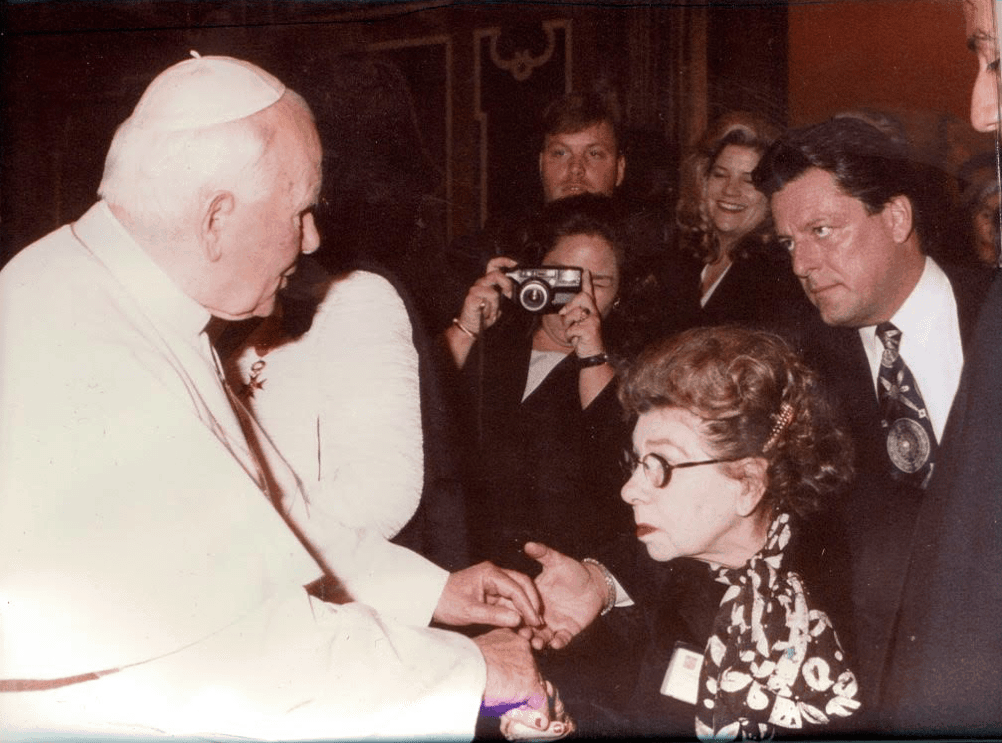 Joe has always believed in the motto, “It is not important what you have, but it is important what you give away!”  He believes that “giving away” can be of your time, your knowledge, your experience, your connections, or your financial contributions. Feeling very fortunate to be adopted from an orphanage as an infant, Joe has always given back.  Joe has always felt the need to “heal the world” in whatever way(s) he can.  He is passionate about the charitable causes he believes in and often engages his friends and clients to get involved, as well. 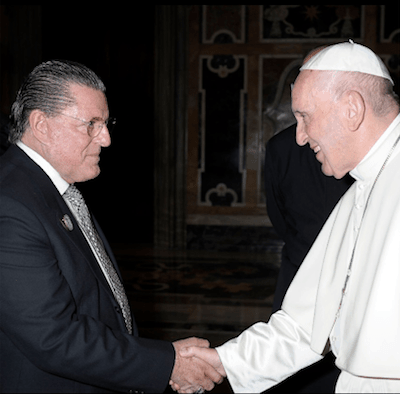 Joe is active in many civic causes, having sat  on the boards of The Turtle Creek Chorale, DIFFA Dallas, MCC’s Hope House, The Patrons of the Arts in the Vatican Museums since 1994; where he has had several private audiences with the last three Popes, TACA Board of Governor’s and EXCAP’s Celebrity Waiter Committee. In 1987, at a mere age of 31, Joe chaired the Boys Towns of Italy’s 42nd annual ball at the Waldorf Astoria in New York and received the coveted Croce d’ Oro Maltese cross for his work on behalf of orphans. His honorary chairs for the event were Nancy Reagan and Frank Sinatra. In 1988 Joe chaired the P.A.W.S. ball at the Crescent Hotel. In 2002, the CAP Center named Joe honorary chairman of their Celebrity Waiter event at Brook Hollow Golf Club. Each time that Joe has been chairman or honorary chairman of an event, more money is raised than from any other of those charities previous fund-raisers. Joe was named the Honorary Chairman for DIFFA Dallas’ 2005 Dream Collection in March, 2005, again aiding in an over 30 percent increase in monies raised ever before from this event. Joe received the Legacy of Love’s Legend Award for 2007 for his continued support of those suffering from HIV/AIDS. Joe was the honoree for the 2008 No-Tie Dinner benefiting the AIDS Services of Dallas, over doubling the evening’s revenue and tripling the attendance!  Joe has assisted in the hot meals program of the Resource Center of Dallas which feeds low-income, poverty-level income, or homeless persons infected with HIV or AIDS. Joe is responsible for helping to take this program’s funding primarily private, thus eliminating the need of funding from the center’s annual budget. Russell Simmons requested that Joe be a co-chair for his Diamond Empowerment Fund’s DALLAS ROCKS GALA in November 2009.  The Art of Living Foundation has named Joe with it’s 2009 Hero of Humanity Award.   Joe annually hosts comedian/actor Leslie Jordan for a benefit for the Legacy Counseling Center and Founder’s Cottage, which is a sold-out annual event now.  Spring 2010 found Joe being honored by Legacy Counseling Center and Founder’s Cottage for his continued gifts to both of those very worthwhile organizations.  Joe has personally raised six figures for the HRC Black Tie Dinner and ASD will present Joe with an yet another award in Spring 2015. Joe is thrilled to be considered in the DIFFA Legends for 2015, also. November of 2016 will be a banner year for Legacy Founder Cottage and Counseling center as Joe again presents award-winning comedian Leslie Jordan in his annual benefit for Legacy. In seven short years this event has gone from netting $6,000.00 to over $98,000.00 in one night!  In May 2017, The Dallas Red Foundation awarded Joe with their Lifetime Achievement Award.

Joe’s soul-mate, Tristan Nieves, donated in Joe’s honor, $5,000.00 that night, which has been tripled by an anonymous friend of Joe’s. This gift took Red Foundation to their most-ever raised in a one night event, and the attendance was up over 30%.!  May 2018, DIFFA Dallas named Joe as one of their “Heroes” and had him walk the runway.

clips that Joe was delivering to a Park Avenue billionaire client, along with other select important pieces from his collection, at the uber-elegant Baccarat Hotel in New York City.

A second segment was filmed in May 2018 in Joe’s Dallas office. It showcased a three-tiered Valrhona chocolate cake by famed chef Connie Mullins, adorned with over

$28,000,000.00 worth of emerald and diamond jewelry. The client allowed his wife to come and select a couple of pieces to make up for an indiscretion on his part!

In Spring of 2019, Joe married Arnold Vincent, a Chilean man residing in Dallas, who has a masters de-

gree in robotics engineering.  Arnold was project manager for four years in the largest copper mine in  Chile, and in charge of the entire team of robots. Due to his love of minerals, and now of gemstones, as well, Arnold is in the process of gaining his certified graduate gemologist degree, as well from the GIA.

Winter of 2020, Joe and Arnold completely underwrote all the expenses to bring Steve Grand to SMU campus to sing and all the ticket sales and sponsorships monies went directly to the Suicide and Crisis Center of North Texas. It’s inaugural year, Arnold was able to present the charity with a check for $21,450.00! Arnold is passionate about this cause and in fact was named a “Fashion Star for a Cause 2020, at their annual event at Dallas Country Club this spring.

Dive straight into the feedback!Login below and you can start commenting using your own user instantly